DetailsJoseph O’Halloran| 06 July 2020Days after showing just how much the mobile platform is contributing to the rapidly growing market, Digital TV Research has released data showing that smartphones will provide two-fifths of 1.161 billion subscription video-on-demand (SVOD) customers by 2025, up from 642 million at the end of 2019. 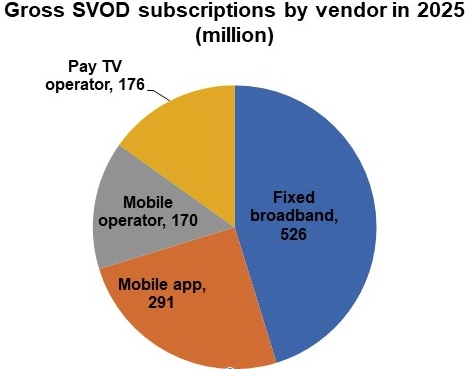 A major advantage to SVOD platforms of partnerships with local mobile or pay TV operators is immediate access to their subscribers, said Simon Murray, principal analyst at Digital TV Research. “Local players can also undertake billing in local currencies. The operators gain commissions and kudos from carrying the SVOD platforms,” he noted.

As evidence of this, the SVOD Forecasts By Vendor report highlighted that Netflix has expanded the number of these partnerships rapidly in recent years. From the 493 operators surveyed, Netflix has deals with 111 of them. After a slow start, rival Amazon Prime Video was rapidly increasing its partnerships, with 52 recorded