The connected entertainment space is moving towards a smartphone model, in which a handful of platform players control the operating system, user experience and consumer access to services and features, new research from Parks Associates has found. 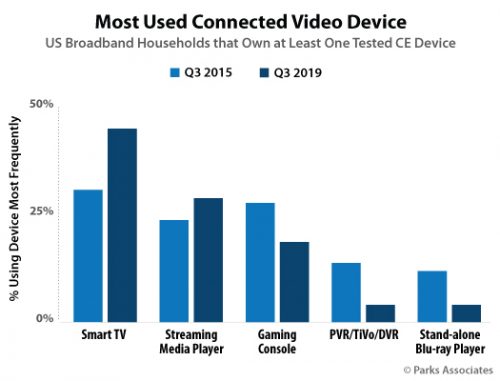 The Connected Entertainment Ecosystems: Competition & Cooperation study examined device and technology platform strategies for players such as Amazon, Apple, Comcast, Google, Roku, Samsung and Sony. It’s top-line finding was that 67% of US broadband households own and use at least one internet-connected video device, either a smart TV, streaming media player, internet-connected gaming console, or connected PVR/DVR.

The study noted that such devices get plenty of use but also have lengthening replacement cycles, which is driving manufacturers to explore new strategies, including software and service offerings, exclusive hardware-content bundles, and open ecosystems. The challenges and thin margins in the CE are also narrowing the field of competitors.

The report also noted that in 2019 alone, 6.4 million US consumers cut the cord on their traditional pay-TV service, transitioning to OTT streaming and/or broadcast television, both of which continue to rise in adoption and usage. It said that major changes in content distribution and consumption were affecting the CE market, notably the rise of OTT services and decline in pay-TV subscriptions.

“The increasing fragmentation in the content services market means there’s no single path to reach consumers,” Hanich added in the Connected Entertainment Ecosystems: Competition & Cooperation study Connected Entertainment Ecosystems: Competition & Cooperation study . “These factors, along with the consumer demand to access their content when and where they are, are pushing the connected entertainment market slowly but steadily in favor of open ecosystems where consumers can access most, if not all, of the services they want on the device they want regardless of which platform they decide to use.”